Furthermore, on Wednesday 2015-09-30, the URL patternfor Nuclear EKs landing page changed. With that in mind, lets take a look at whats happening with Nuclear.

In the above images, the initial HTTP GET request always starts with /search?q= for the landing page URL. ">Shown above: Some URLs fromNuclear EK on 2015-09-30.

The initial HTTP GET request now starts with /url?sa= instead of">for the landing page URL. I saw the same thing from three different examples of Nuclear EK on 2015-09-30. Windows hosts from these examplesall had the exact">Nuclear EK examples from 2015-09-30

Playing around with the pcap in Wireshark, I got a decent representation of the traffic. Below, youll see the compromised website, Nuclear EK on 188.226.215.37, and some of the post infection traffic. TLS activityon ports 443 and 9001 with random characters for the server names is Tor traffic. Several other attempted TCP connections can be found in the pcap, but none of those were successful, and theyre not shown below. " />
Shown above: Some of the infection traffic from the pcap in Wireshark (from a Windows host usingIE 10 and Flash player 14.0.0.125).

For the third run, I used a Windows host with IE 11 and Flash player 18.0.0.203. As mentioned earlier, the browser would crash before the EK sent the payload, so this host didnt get infected with malware. I tried it once with Flash player and once without Flash player, both times running an unpatched version of IE 11. Each time, the browser crashed. Nuclear EK was still using the same IP address, butdifferent domain names were different. Within a 4 minute timespan on the pcap,youll find" />
Shown above: Nuclear EK traffic using">1 and Flash">18.0.0.203... Tried twice but">below">Shown" />
Shown" />
Shown above: Nuclear EK sends the secondmalware payload.

Earlier today, various sources reporteda highly-suspicious Windows update. According to Ars Technica,a Microsoft spokesperson stated the company hadincorrectly published a test update and isin the process of removing it [1]. The update is no longer available, and ZDNet hasconfirmed this wasa test update gone errant">Thanks to everyone who notified us at the ISC.">www.malware-traffic-analysis.net - Twitter: @malware_traffic 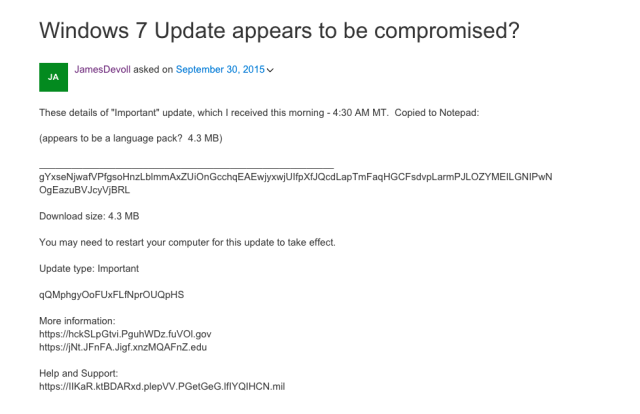 Microsoft said a highly suspicious Windows update that was delivered to customers around the world was the result of a test that wasn't correctly implemented.

"We incorrectly published a test update and are in the process of removing it," a Microsoft spokesperson wrote in an e-mail to Ars. The message included no other information.

The explanation came more than 12 hours after people around the world began receiving the software bulletin through the official Windows Update, raising widespread speculation that Microsoft's automatic patching mechanism was broken or, worse, had been compromised to attack end users. Fortunately, now that Microsoft has finally weighed in, that worst-case scenario can be ruled out. What follows is the remainder of this post as it appeared before the company issued its explanation.

Re: Cisco AnyConnect elevation of privileges via DMG install script 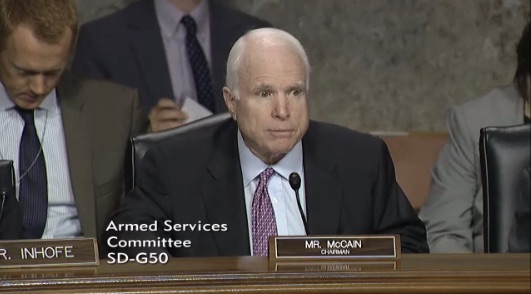 The employee records from the Central Intelligence Agency were not included in the data cache from the Office of Personnel Management hack, according to government officials. However, that doesn't mean the CIA has been unaffected by the breach. The Washington Post reports that according to unnamed current and former US officials, the CIA pulled "a number of officers" from the US Embassy in Beijing as a precautionary measure following the breach—precisely because their names would not appear in State Department personnel files believed to have been obtained by Chinese intelligence operatives.

The question of how to respond to the OPM breach was raised yet again during testimony by intelligence and defense officials on September 29 before the Senate Armed Services Committee. The hearing on "United States Cybersecurity policy and threats" delved into the distinction being made by the Obama administration between electronic economic espionage and the hacking of government agencies and why the breach at the OPM was not considered an attack warranting a proportionate response from the US. No US official has gone on the record to attribute the OPM breach to China.

Director of National Intelligence James Clapper told the committee that while "we don't know in terms of specifics" what was taken in the OPM breach, it had "potentially very serious implications, first among them close to home [for me] in terms of the Intelligence Community and identifying people who may be under public status... This is a gift that's going to keep on giving for years." Still, he said, as "egregious" as the OPM breach was, it didn't amount to an attack on national infrastructure. "Rather, it would be a form of theft or espionage. We, too, practice cyber espionage. We're not bad at it." 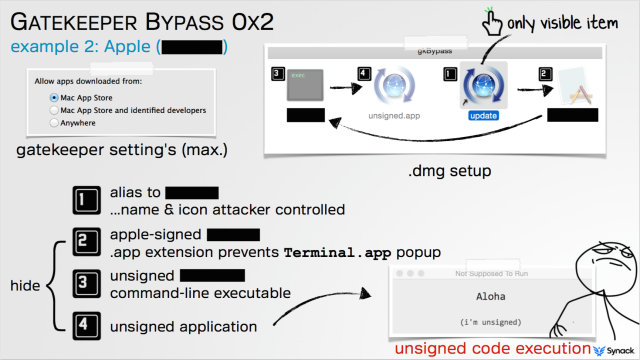 Enlarge / The file names in this screenshot have been redacted to protect the vulnerable. (credit: Patrick Wardle)

Since its introduction in 2012, an OS X feature known as Gatekeeper has gone a long way to protecting the Macs of security novices and experts alike. Not only does it help neutralize social engineering attacks that trick less experienced users into installing trojans, code-signing requirements ensure even seasoned users that an installer app hasn't been maliciously modified as it was downloaded over an unencrypted connection.

Now, a security researcher has found a drop-dead simple technique that completely bypasses Gatekeeper, even when the protection is set to its strictest setting. The hack uses a binary file already trusted by Apple to pass through Gatekeeper. Once the Apple-trusted file is on the other side, it executes one or more malicious files that are included in the same folder. The bundled files can install a variety of nefarious programs, including password loggers, apps that capture audio and video, and botnet software.

Patrick Wardle, director of research of security firm Synack, said the bypass stems from a key shortcoming in the design of Gatekeeper rather than a defect in the way it operates. Gatekeeper's sole function is to check the digital certificate of a downloaded app before it's installed to see if it's signed by an Apple-recognized developer or originated from the official Apple App Store. It was never set up to prevent apps already trusted by OS X from running in unintended or malicious ways, as the proof-of-concept exploit he developed does.