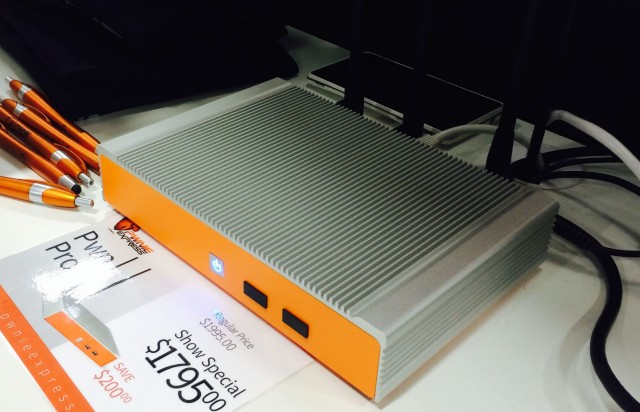 At Black Hat and Def Con earlier this month, the penetration testing tool makers at Pwnie Express unveiled two new products aimed at extending the company's reach into the world of continuous enterprise security auditing. One, the Pwn Pro, is essentially a souped-up version of Pwnie Express' Pwn Plug line of devices; the other, Pwn Pulse, is a cloud-based software-as-a-service product that provides central control of a fleet of Pwn Pro “sensors.” Combined, the two are a whitehat’s personal NSA—intended to discover potential security problems introduced into enterprise networks before someone with malevolent intent does.

While Ars was given a brief look at the new products in Las Vegas, we’ll be conducting a more intensive, full review of Pwn Pro and Pwn Pulse in the near future. Rest assured that our review will be heavily informed by our experience with the Pwn Plug 2. But despite our somewhat brief experience with the new products, it’s not a stretch to say that they are a significant upgrade to Pwnie’s previous capabilities.

First, some full disclosure: Ars has worked in the past with Pwnie Express Chief Technology Officer Dave Porcello. Specifically, Porcello helped us turn a Pwn Plug R2 into a miniature deep packet inspection machine during our collaboration with NPR. After that experience, we purchased a Pwn Plug R2 of our own to continue to perform vulnerability testing in our own lab. That means we have more than a passing familiarity with the team behind the Pwn products, but it also means we’ve put some mileage on the technology that underlies them as well.

At no time in history has there been a greater need to hire security
professionals to protect and defend infrastructures from an inexhaustible
onslaught of organized crime, industrial espionage, and nation-state
attacks.

A small talent pool, an inflated wage bubble and the high...

LIZHONG FAN’S DESK WAS AMONG A CROWD of cubicles at the Arizona Counter
Terrorism Information Center in Phoenix. For five months in 2007, the
Chinese national and computer programmer opened his laptop and enjoyed
access to a wide range of sensitive...

Hackers attacked Sony's PlayStation Network and apparently disrupted the
travel plans of a top company executive by going on Twitter to suggest
that there was a bomb on his American Airlines plane.

American cut short the Sony Corp. executive's flight on Sunday and made an...

If you don’t understand the capabilities and motivations of your
adversaries – you can’t expect to be very successful in managing your
relationship with them, negotiating, or defending against their
advancements.

This is especially true today when it comes to...

Chinese authorities say Microsoft has yet to fully comply with the government's antimonopoly investigation, and they want more information about its media player and Web browser distribution.

U.S. data centers use more electricity than they need, a new report finds, and IT managers are too cautious about managing power and businesses are unwilling to invest in energy conservation.