Malicious e-mails usually fall into two groups: Mass-mailed generic e-mails, and highly customized spear phishing attempts. In between these two groups fall e-mails that obviously do more to "mass customize" the e-mail based on information retrieved from other sources. E-mails that appear to come from your Facebook friends, or malware that harvests other social networks like Linkedin to craft a more personalized message.

Today, I received one e-mail that I think was done pretty well and falls into the third category. The sender went through the trouble to craft a decent personalized message, trying to make me install some Spyware.

In this example, the e-mail advised me of a new "WhatsApp" message that may be waiting for me. The e-mail looks legit, and even the link is formed to make it look like a voicemail link with the little "/play" ending 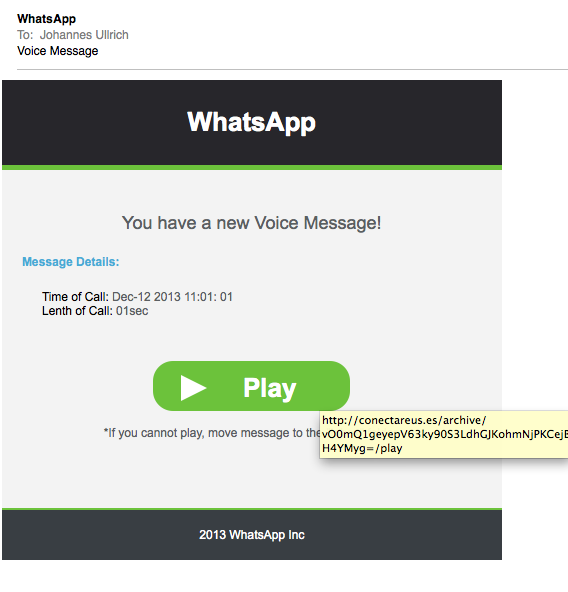 the part that I thought was the most interesting was the executable you are offered as you download the emails. The downloaded file is a ZIP file, and the file name of the included executable is adjusted to show a phone number that matches the location of the IP address from which the e-mail is downloaded from.

As usualy, anti-malware coverage is bad according to Virustotal [1]. Anubis doesn't show much interesting stuff here, but I wouldn't be surprised if the malware detected that it ran in an analysis environment [2]. Interestingly, it appears to pop up Notepad with a generic error message.

Sprint is considering an acquisition of T-Mobile US that would reduce the U.S. mobile industry to three large carriers if approved by regulators.

From single digits to trillions, the tech industry loves numbers, and it generated plenty of them in 2013. Here's a look at some of the figures that stand out from the year:

Governments and businesses are getting flying robots. But when will personal drones fly into our lives? Columnist Mike Elgan wants one.