As Adobe says, it could cause a crash and potentially allow an attacker to take control of the affected system. Well, strike that potentially since it is being actively exploited in the wild.
The good news is that the current version of Flash Player (21.0.0.182) at the moment prevents exploitation of the vulnerability (at least with exploits that are currently circulating).

In any case, Adobe should release the patch tomorrow (7.4.) so patch as soon as you can to be sure that the vulnerability has been completely mitigated (and of course, use an addon such as NoScript).

Adobe offers a handy web page to check which version you have currently installed at http://www.adobe.com/software/flash/about/, while the original advisory is available at https://helpx.adobe.com/security/products/flash-player/apsa16-01.html 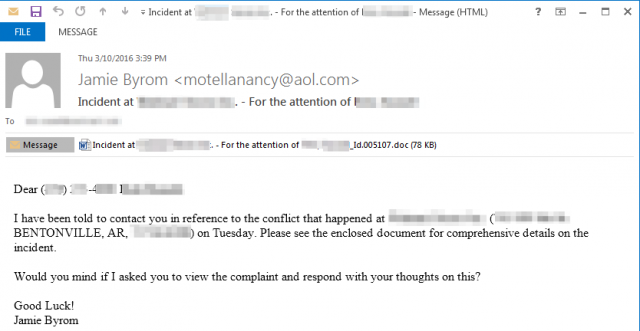 For the past decade, spear phishing—the dark art of sending personalized e-mails designed to trick a specific person into divulging login credentials or clicking on malicious links—has largely been limited to espionage campaigns carried out by state-sponsored groups. That made sense. The resources it takes to research the names, addresses, and industries of large numbers of individuals was worth it when targeting a given organization that had blueprints or some other specific piece of data prized by the attacker. But why go through the trouble to spread crypto ransomware or banking trojans to the masses when a single scam e-mail could do the trick?

Since the beginning of the year, that truism has begun to unravel. According to researchers at security firm Proofpoint, a single threat actor, dubbed TA530, has been targeting executives and other high-level employees in an attempt to trick them into installing an assortment of malware—including the CryptoWall ransomware program that encrypts valuable data and demands a hefty fee to undo the damage. Other malware spread in the campaign includes the Ursnif ISFB banking trojan and the Ursnif/RecoLoad point of sale reconnaissance trojan targeting businesses in the retail and hospitality industries. Targeted executives typically have titles of chief financial officer, head of finance, senior vice president, and director.